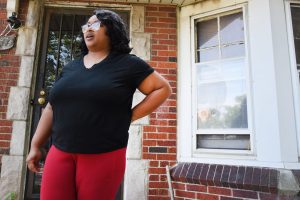 Nearly one in four Detroit homeowners owes more in delinquent property taxes than they did three years ago despite being a part of a county program designed to help them get out of debt and avoid foreclosure, according to a Detroit News analysis.

The payment plans, with lower interest rates and an extended five-year repayment deadline, were a solution devised by officials, including Mayor Mike Duggan, to get homeowners out of danger in the midst of Detroit’s record-setting tax foreclosure crisis.

But a Detroit News investigation by News reporter Christine MacDonald and FIJ grantee Mark Betancourt has found that the plans, enacted in state law in 2015, have kept thousands in a payment plan purgatory that likely will lead to the loss of their homes without more help.

Candis Patterson of Detroit has been on a payment plan for unpaid property taxes since December 2015. She finds it difficult to keep up with the $179 monthly payment and worries about losing her home. Photo by Max Ortiz, The Detroit News
Ana Arana December 4, 2019