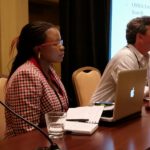 NEW ORLEANS — It all began with a tweet from a lady working in an organization concerned about governance of water bodies such as rivers. On responding to the tweet, she informed me of the danger that was being posed to Lake Turkana in Kenya due to the construction of Gibe 111 dam in Ethiopia, urging me to follow up on the story. I went a notch higher and presented a proposal to the Fund for Investigative Journalism to investigate the story, which was accepted. It is because of this investigative series that highlighted the plight of Kenyans and even Ethiopians that I landed an opportunity to attend the Investigative Reporters and Editors conference in New Orleans in June 2017.

It was a time for the crème de la crème in investigative reporting globally to converge in New Orleans to share their work and share ideas on how to make investigative reporting better. Sessions explored several themes ranging from data journalism, health reporting freelancing and business journalism. I was happy to be a panelist in the session on uncovering stories on the environmental beat, alongside other journalists from the Society for Environmental Journalists (SEJ). I was able to share my work in environmental reporting in Kenya with conference participants.

My presentation focused on Gibe III dam in Ethiopia, its connection to Lake Turkana in the North of Kenya and the predicament facing residents who rely on the Lake for water for domestic purposes. The audience applauded the Turkana reporting for the series #Lake TurkanaUnder Siege, saying it was an important avenue for the vulnerable community to share their plight.

Through it, I was able to amplify the voices of locals who are likely to suffer the consequences of lack of water. I also highlighted the challenges in finding and producing environmental stories in Kenya. This gap is being bridged through training and collaborations with global institutions. The presence of associations such as the Kenya Environment and Science Journalists Association (KENSJA) www.kensja.org help to bring journalists together to carry out activities that strengthen science journalism. But it is noteworthy that newsrooms must make intentional effort to create time for these stories in the editorial agenda. I particularly liked the Show and Tell broadcast session, in which journalists share their investigative pieces with peers who critique and offer suggestions.

I was privileged to have a conversation with Ricardo Sandoval Palos, the president of FIJ on the sidelines of the conference, during a reception for freelancers. Palos expressed FIJ’s continued commitment to funding journalists around the globe to enable them produce stories they would not have produced, owing to the limited funding available in newsrooms.

There was a glaring absence of journalists from across Africa at the conference. David Kaplan, Executive Director of the Global Investigative Journalism Network (GIJN) says there is an intentional approach to increase the participation of Africans at the conference. The next summit of GIJN will be held in Johannesburg, South Africa. I was also privileged to meet Mark Horvit, Executive Director of Investigative Reporters and Editors (IRE).

At the conference, I met journalists from across the globe, doing amazing work. I will be taking the next step to open discussions on ways of collaborating.

But it was not all work, as IRE presented an opportunity to explore the rich culture of New Orleans. Attendees toured the New Orleans Museum where they were treated to a rich menu of the southern cuisine as well as great music.