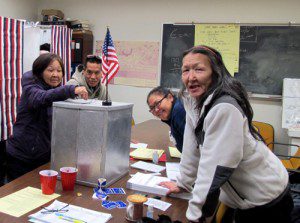 But at the Pine Ridge Indian Reservation in South Dakota, she discovered evidence of voter suppression. The Justice Department intervened, and Native voter turnout surged.

Read the five-part series from Alaska: (A Seat at the Table), (Celebrates), (Election Morning), (The Alaska Native Way), and (One Voter at a Time), her photo-essay on Huffington Post, and the two-part series from South Dakota, (The Sheriff), and (A Bumpy Road).