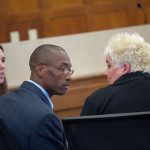 From Nancy West, for VTDigger, the story of how convictions are being overturned nationwide – sometimes after decades of imprisonment – because prosecutors failed to tell defendants that police officers testifying against them had a history of dishonesty or excessive force buried in confidential personnel files. There’s no way to know how many convicts are unaware they were denied their constitutional right to all favorable, material evidence against them.

Photo: Sean Ellis is pictured with his attorneys at his bail hearing in Boston. A judge ordered a new trial for Ellis who spent 22 years in prison after being convicted of killing a Boston police detective. Courtesy of the Schuster Institute for Investigative Journalism, Brandeis University.
sandy.bergo July 20, 2015