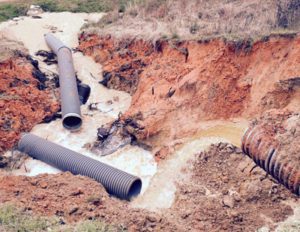 For years, more than 7,000 small dams across Texas have gone unregulated or uninspected. Despite their size, many small dams are ticking time bombs, according to safety experts. And state data show that the rate of failure for these dams is increasing dramatically: Of the approximately 300 dam failures in Texas since 1910, half have occurred in the last nine years. The effects of climate change further compound the impact as increasing rainfall – particularly in the eastern half of the state – leaves more and more communities threatened.

In Dammed to Fail in the Texas Observer, Naveena Sadasivam traces the history of a burgeoning crisis, one fueled by this lack of regulatory oversight and political will on the part of the Texas Legislature.

In March 2016, floodwaters dug a 50-foot wide hole on the downstream end of this dam. Photo by Delos Dewayne Collins for the Texas Observer