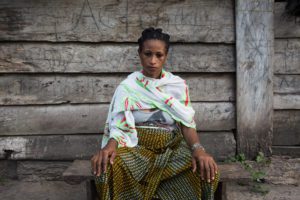 When Colorado-based Newmont Mining arrived in the hills of Brong-Ahafo in Ghana in 2004, locals were optimistic that Africa’s second-largest gold producer would deliver lucrative jobs. But Sophia Jones, reporting for Sierra magazine, found that thousands of residents have been displaced by Newmont and its open-pit, cyanide-processing mine. Jones, an editor and reporter with the Fuller Project for International Reporting, and Accra-based photojournalist Ruth MacDowall say they discovered widespread abuses against the local population, including alleged sexual assaults. Farmers have been pushed out and their land destroyed. Jones writes that women bear the brunt of the physical, social and economic impacts of mining and some are battling Newmont for a return of their land and livelihood.

In photo by Ruth MacDowall, Zeinabu Dawda regularly attends protests against Newmont. “I will persevere,” Dawda says. “I don’t fear anything.”

[Funding for this project was provided by the Reva and David Logan Foundation.]
Bobby Calvan February 2, 2018