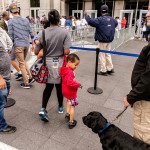 From City Limits, an investigation finds that weak laws and oversight, poor training and limited accountability affect much of the private-security industry in New York State. While pay has improved in recent years, many security workers still deal with low wages and training scams. Private security guards are everywhere in New York City, from construction sites to department stores, banks and homeless shelters, and yet New York’s laws and regulatory agencies have failed to keep up with the explosion in demand since September 11. The public has limited recourse when guards do something wrong.