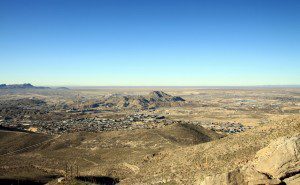 From Sunland Park, New Mexico, a series by Kent Paterson of Frontera NorteSur on the uneven efforts to reverse years of neglect and environmental degradation of border town areas known as “colonias.” In Part One, Paterson reports on critically needed flood control measures that are improving conditions near affluent subdivisions, while the poverty-stricken Anapra neighborhood of Sunland Park waits its turn, again. In Part Two, we find out about lead and arsenic contamination that exceeds the EPA’s limits for residential areas. And in Part Three, Paterson details allegations of corruption that may have siphoned off funds that could have been the colonia’s best chance of developing into a livable place. Especially ironic: charges of using public funds for a personal spending spree are leveled at a one-time activist who had worked for passage of the 2010 Colonias Infrastructure Act.