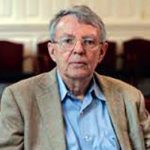 He has won numerous awards for his reporting at home and abroad and was twice nominated a finalist for the Pulitzer Prize. Ottaway was a Fellow at the Woodrow Wilson Center in 1979-80 and again in 2005-06 and is currently a Senior Scholar there. His most recent book, published in November 2008, was The King’s Messenger: Prince Bandar bin Sultan and America’s Tangled Relationship with Saudi Arabia. He is currently working on a book regarding the changes underway in the Arab world.