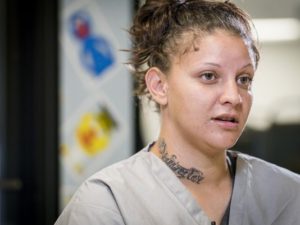 In her latest package focusing on recidivism in America for USA Today, FIJ/Schuster Institute diversity fellow Lottie Joiner examines how women are faring in a criminal justice system designed with men in mind. Many of the programs that help inmates re-enter society aren’t appropriate for women, Joiner reports. Once an inmate is in the system, it’s hard for her to stay out; in fact, about 70% of female inmates return to the system within five years. Joiner most recent multimedia package focuses on the struggle by one woman to keep herself out of prison for good.

Chapter 2 focused on how one woman was seeking to change the system after being caught in the revolving door of the criminal justice system.

Chapter 3 looks into the experiences of another woman, who has been in and out of custody since she was 12.

(In photo by Jarrad Henderson for USA Today, Candace Harp-Harlow talks about the struggles to put herself back on the right path.)

[Reporting for this project was provided by the Ford Foundation.]