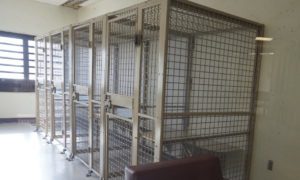 With no place to house some mentally ill people who could pose a danger to themselves or others, New Hampshire has taken the unusual step of housing them in the psychiatric unit of the state prison — even if they haven’t committed a crime, according to a report by Nancy West, co-published by InDepthNH.org and the New Hampshire Business Review. That’s despite warnings by the New Hampshire Psychiatric Society three decades ago advising against commingling civilly committed individuals with convicted criminals. Some states, West noted, have banned the practice even for very brief holds.

(Photo by Nancy West: “Therapy booths” are used for group therapy for some mentally ill patients at the Secure Psychiatric Unit at the New Hampshire State Prison for Men in Concord, New Hampshire.)

[Reporting for this project was provided by the Ethics and Excellence in Journalism Foundation.]