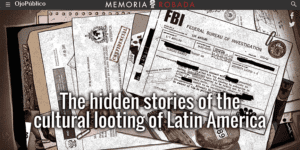 The trafficking of stolen cultural or historical artifacts is a worldwide concern, but an underreported one. David Hidalgo and the Peruvian investigative site Ojo Público launched an online catalogue of stolen artifacts that could help draw attention to the problem. Four independent teams across Latin America contributed to the cross-border endeavor, which included investigative journalists, computer programmers and data analysts. Relying on information collected from government agencies, independent organizations and Interpol, the group amassed a census of stolen art that begins to reveal the reach of a global network of smuggled items that the United Nations says generates billions of dollars in illegal profits.

[Reporting sponsored by the Reva and David Logan Foundation.]