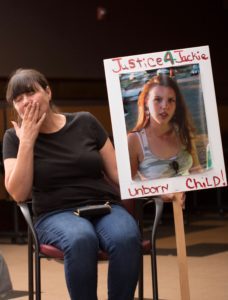 The death of Jackie Salyers, a pregnant 32-year-old Puyallup tribal member, went mostly unnoticed when police in Tacoma, Washington, shot her in the head in January. As publicity over police shootings intensifies, scant attention has been focused on Native Americans who are killed by authorities, according to Stephanie Woodard’s report for “In These Times.” According to data from the Centers for Disease Control and multiple other tabulations, police kill Native Americans at a rate higher than any other group. Inspired by the “Idle No More” and “Black Lives Matter” campaigns, Native Americans are working to focus attention on police-related deaths in their communities and address the root causes of the violence.

(Photo: Lisa Earl has joined the Puyallup tribe in mourning victims of police violence, including her daughter Jackie Salyers, who was pregnant at the time Tacoma police shot her. Photo by Joseph Zummo.)

[Reporting sponsored by the Reva and David Logan Foundation.]