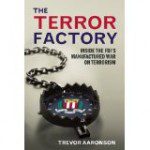 Journalist and author Trevor Aaronson appeared on CBS This Morning to describe his investigation of the FBI war on terrorism, which found that many of the agency’s stings were designed with the means, methods, and planning details supplied by the government, not the alleged terrorists.

“Few Americans,” Aaronson says, “realize that since 9/11 the FBI has been responsible for hatching and financing more terrorist plots in the United States than any other group.”

Aaronson’s book, The Terror Factory: Inside the FBI’s Manufactured War on Terrorism, which outlines his findings, went on sale this month. His investigation into the FBI sting operation began with support from the Fund for Investigative Journalism.