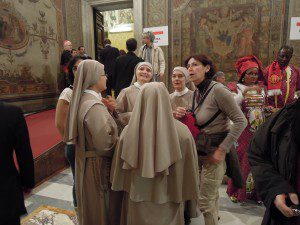 From Rome, Jason Berry reports for GlobalPost on the battle between the Catholic Church leadership, and the nuns in the United States. In a series of reports entitled, “A New Inquisition: The Vatican’s Investigation of American Nuns,” Berry reports that the Bishops investigating US nuns have poor records on sex abuse cases and that disinformation permeates the Vatican crackdown. From his series: “As the Vatican lowers a curtain of scrutiny across communities of religious women in America, a small but resonant chorus of critics is raising an issue of a hypocrisy that has grown too blatant to ignore. The same hierarchy that brought shame upon the Vatican for recycling clergy child molesters, a scandal that rocked the church in many countries, has assumed a moral high ground in punishing the Leadership Conference of Women Religious, a group whose members have put their lives on the line in taking the social justice agenda of the Second Vatican Council to some of the poorest areas in the world.

“Many nuns from foreign countries wonder if the investigation is an exercise ‘in displaced anger,’ as one sister puts it, for the hierarchy’s failure in child abuse scandals across the map of the global church.”