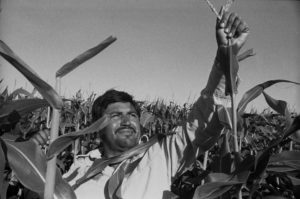 A two-year investigation found that seed-corn companies like Monsanto use contractors to recruit thousands of migrant farm workers for producing hybrid corn seeds in an $11 billion industry. According to the investigation by Laird Townsend for the Midwest Center for Investigative Reporting, the use of contractors has led to repeated allegations of labor violations over the past decade against Monsanto, DuPont Pioneer, and their contractors — from broken recruiting promises and minimum-wage violations, to improperly withheld pay and substandard housing.

(Photo by Alan Pogue/Texas Center for Documentary Photography: Marcilia Estrada Castillo reaches to pull off a tassel from an ear of corn on a detasseling job in 1981. Detasseling facilitates the production of hybrid corn. The practice has remained little changed for decades.)

[Reporting for this project was sponsored by the Park Foundation.]