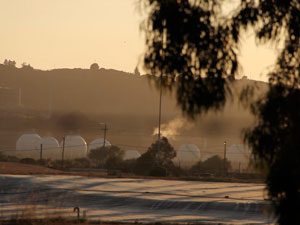 From Madeline Ostrander, reporting for The Nation, the story of California’s Cap-and-Trade program, and whether it will be fair to communities suffering from the state’s worst air pollution.

Excerpts: “California has been nearly alone in its efforts to curtail greenhouse gases, after attempts to pass federal climate legislation collapsed in Congress in 2010 and several states abandoned plans to pursue their own regulations. The nation’s only other program, the Northeast and Mid-Atlantic states’ Regional Greenhouse Gas Initiative, regulates power plants alone. But this spring, several Democrats, including Senator Barbara Boxer, are trying to push new climate bills through Congress. AB 32’s success or failure could buoy or sink the prospects for federal legislation—and influence the course of similar initiatives in other countries…

“…cap and trade applies to California’s biggest and most notorious polluters. Starting this year, the refineries in Wilmington, for example, will need to acquire allowances or offsets for every ton of greenhouse gases they emit. Each year, they’ll decide whether it’s cheaper to cut carbon emissions at their facilities or buy more rights to pollute.”