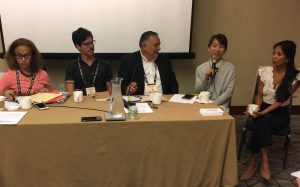 Fund for Investigative Journalism former Board President Ricardo Sandoval Palos and Director of Operations Ana Arana were at the Excellence in Journalism 2019 conference organized by the Society of Professional Journalists, the National Association of Hispanic Journalists and the Radio Television Digital News Association. Sandoval Palos and Arana led a panel on how freelance journalists can apply for grants. Joining them on the panel were former FIJ grantees Johnny Magdaleno and Jenni Monet, who shared tips on how they found grant money for reporting expenses. “Independent investigative journalists do not have to go into debt to get a good story,” said Sandoval Palos.  Monet said journalists should be careful about how they put together their budgets and former grantee Magdaleno said he kept applying for grants even after he was initially turned down. “You can always reach out to funders and ask how you can improve your pitch,” he said.