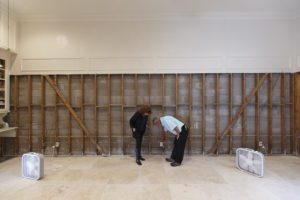 Even after Hurricane Harvey, the best efforts by Harris County officials to purchase the most flood-prone homes won’t make a dent in the larger problem, according to the Texas Tribune in a collaboration with Reveal and ProPublica. Despite the obvious need and high demand, Harris County, home to Houston, is plagued by challenges endemic to buyout programs. Limited funds, competing priorities, strict criteria place buyouts out of reach of willing participants. The snail’s pace of bureaucracy, which puts homeowners in limbo while creating opportunities for private developers to buy and flip flooded homes, also perpetuates the problem.

In photo by Michael Stravato for the Texas Tribune: Maurine Howard and husband Dave Davis are concerned with load bearing walls that may need to be replaced. Their home was flooded for weeks after water was released from Barker reservoir.