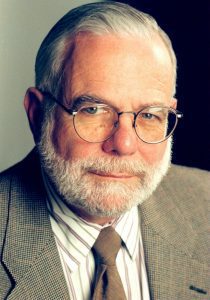 Former FIJ Board Member George Lardner Jr., who won the Pulitzer in 1993 for an investigation into the murder of his 21-year-old daughter, Kristin, died in Washington, D.C. on Sept. 21.  Lardner, 85, was a former Washington Post reporter and a scholar in residence at the Investigative Reporting Workshop. He retired from the Post in 2004.
Lardner was known as a dogged reporter and elegant writer. He descended from a long line of writers, the Post wrote in its obituary.
The investigation of his daughter’s murder resulted in a 9,000-word account that pulled apart her life as an art student in Boston and described how Michael Cartier, an abusive ex-boyfriend, stalked and killed her despite several orders of protection. Cartier had a long history of violence against animals and women, Lardner found out.
When he received the Pulitzer, Lardner said he would “give anything not to have written” the story that won it. Mr. Lardner always said that his account of his daughter’s death, which he later expanded into the book “The Stalking of Kristin” (1995), was the most important story he ever wrote.
His family said Lardner remained passionate about the purpose of journalism and the value of a free press, and to honor his memory, they requested donations be made to FIJ in lieu of flowers.
Ana Arana September 24, 2019