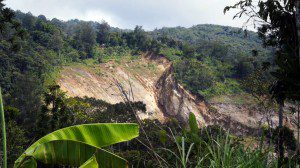 From Ian Shearn, published in The Nation, the story of a U.S. government decision to make a $3 billion loan which contradicted President Obama’s pledge to address climate change by phasing out fossil fuel subsidies. Shearn uncovered evidence that the project was the cause of a deadly landslide and has continuing disastrous impacts on the local environment and communities of Papua New Guinea.

The Huffington Post also ran a compelling short documentary on the story with interviews from local residents, and officials.

An excerpt from The Nation article: “The ExxonMobil loan was hardly the only exception to [President Obama’s] stated position. Since Obama took office, the Export-Import Bank has invested more than $27 billion in fossil fuel endeavors, while lending less than $2 billion to clean energy projects.”