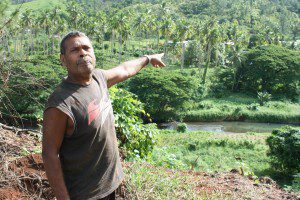 Reporting from Fiji, site of an $8.7 million get-away from rising sea levels in the Pacific, Christopher Pala reports the purchase had no clear purpose: “…while [Kiribati president Anote] Tong’s warnings of impending doom for atoll dwellers have brought him a measure of fame abroad and even a panel that nominated him for a Nobel Peace Prize, in Kiribati they elicit confusion in some people and derision in others.

“A lot of people now worry about climate change,” said Tealoy Pupu, a 20-year-old student, as she lay pandanus leaves out to dry. “We just don’t know what to think.”

Tong’s predecessor as president, Teburoro Tito, had read the scientific studies on atoll dynamics. “The scientists tell us that our reefs are healthy and can grow and rise with the sea level, so there is absolutely no need to buy land in Fiji or anywhere else,” he said emphatically. “How can we ask for foreign aid when we spend our own money on such foolish things?”

“We know that the whole reef structure can grow at 10 to 15 mm a year, which is faster than the expected sea-level rise,” confirmed Paul Kench, an atoll geo-morphologist at the University of Auckland.”

Pala’s reporting on the Fiji purchase also appeared in The Atlantic Magazine.