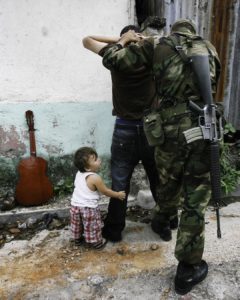 In her first installment of a series of stories focused on anti-gang security policies in El Salvador, FIJ/Schuster Institute fellow Danielle Mackey reports on the rising number of enfrentamientos — or “shoot-outs” — that have taken the lives of young El Salvadorans. The number of civilian victims in these enfrentamientos has jumped from 39 in 2013 to 591 in 2016. But as Mackey reports for World Politics Review (non-subscription link here), the killings of many suspected gang members may not have been the result of shoot-outs, as police claim, but were extra-judicial executions carried out under a zero-tolerance policy put in place by national police. According to Mackey’s report, a group of middle-school boys were among the victims of the police crackdown on gangs, including the so-called MS-13, a violent street gang with origins in Los Angeles, California.
(In a 2010 file photo by Oscar Leiva (@oleivaphoto), a soldier performs a random stop-and-search in the neighborhood of a young father in  the municipality of Mejicanos, San Salvador.)
[[Funding for this project was provided by the Ford Foundation.]
Bobby Calvan March 15, 2018