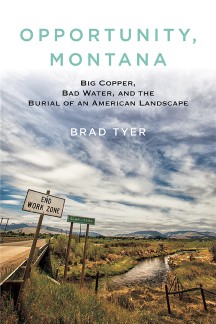 Journalist and author Brad Tyer moved to Montana for the picture-postcard scenery, looking for pristine waters where he could set down a canoe. What he found was entirely different. From the book: “I gradually began to gather that the Clark Fork [River] wasn’t quite what I thought it was. The river I had shadowed on my drive in had long been choked by the detritus of a century’s worth of copper mining upstream. The ‘Treasure State’ of Montana’s license plates was sourced in metal, and it had been mined for a century in Butte… Butte copper had wired America, strung across the country to deliver residential electricity and telephone connections, feeding power to unbridled industrial growth and cladding the bullets that won two world wars.”

But by 1983, the toxins created by copper production had turned the Clark Fork River’s upper reaches into the largest Superfund site in the US.

Tyer’s book, Opportunity, Montana: Big Copper, Bad Water, and the Burial of an American Landscape, published by Beacon Press, tells the story of the attempts to restore and rebuild a poisoned river. Tyer finds that in the process, “millions of tons of toxic soils are being removed and dumped – once again – in Opportunity,” a small forgotten town in Montana.