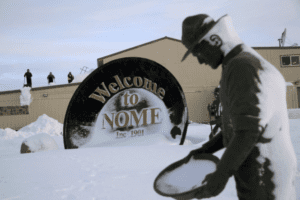 For years, Alaska Native women have urged officials to address a crisis of violence throughout their state: Reported rapes are twice the national average, and child sexual violence is six times the national average.  Alaska’s western region has the state’s highest rate of felony sex offenses, and the overwhelming majority of victims are Alaska Native. Victoria McKenzie addresses the issue in a story co-published by Associated Press and National Native News.

In Nome, a city of fewer than 4,000 full-time residents that serves as a regional hub for dozens of smaller villages across western Alaska’s Bering Strait region, rape survivors and their supporters say the city’s police department has often failed to investigate sexual assaults or keep survivors informed about what is happening with their cases, even after they underwent invasive rape exams. An analysis of police records shows that, over the past decade, only 8 percent of calls to the department about sexual assaults resulted in an arrest with charges filed. Even fewer made it to court.