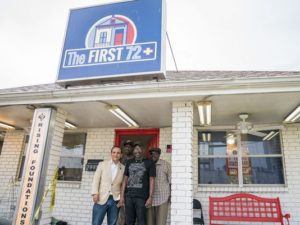 FIJ/Schuster diversity fellow Lottie Joiner completes her series on recidivism for USA Today by looking at the experiences of men incarcerated in Louisiana, which has one of the highest incarceration rates in the country.  In her latest multimedia installments for her “Policing the USA” project, Joiner features former felons getting help from a program called “First 72+,” which is trying to help men break free from the cycle of crime and imprisonment. Joiner reports that the United States spent more than $56 billion in 2015 to lock people up. Studies show that the United States has the highest incarceration rate in the world. African American men, in particular, are jailed at higher rates than other groups. As part of her project, Joiner also interviews best-selling author Shaka Senghor, who went to prison when he was 19 after being convicted of second-degree murder.