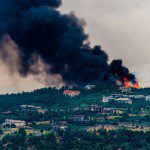 From I-News in Denver, Colorado: “The number of wildfires in Colorado has exploded during the past decade. So has the number of people living in high-risk fire zones. And public policies for dealing with both actually risk making the state’s fire danger even worse.

We analyzed data from the U.S. Census and the state, and found that one in four Colorado homes is located in a fire zone. A quarter million people have moved into the red zone in the past two decades – 100,000 of them since the state’s largest wildfire, the Hayman Fire, 10 years ago. …

“Some of the explosion in fires is explainable by climate change. In some areas of the Rocky Mountains, the fire season is almost two months longer than it used to be. Colorado’s fire season has consistently extended into the spring as the drying and warming climate thins snowpacks and desiccates fuels earlier in the spring. …

“But climate change is not the only problem. Public policies regarding both population growth and forest management are adding to the wildfire problem:

• It costs millions to protect homes in the red zone from wildfires, but homeowners don’t foot that bill. Taxpayers do. That creates a perverse incentive to build there despite risks.

• A continued population boom in the red zones is pushing homebuilders to higher elevations, where forest conditions increase the chances of more intense fires.

• The Rocky Mountain forests have become overgrown and in many cases unhealthy. State and federal forest management policies call for cutting down excess trees and doing prescribed burns. But the population boom puts pressure on both these strategies – people often don’t want to see trees cut or landscapes burned near their homes. That leaves the forests full of highly flammable fuel, waiting for the next fire.”