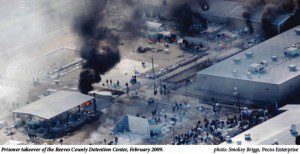 From Forrest Wilder of the Texas Observer, the story of an aggressive federal immigration policy that fills the cells of privately run prisons.

An excerpt from Wilder’s report: “Instead of simply detaining undocumented immigrants who have done nothing more than cross the border and sending them out of the country or releasing them, the U.S. government would now file criminal charges and send them to prison. [Jose] Rios was charged with illegal re-entry, a federal immigration felony that earned him a 14-month sentence, much of it spent in a notorious private prison in South Texas. Rios pleaded guilty, as do 97 percent of all immigration-related defendants.”