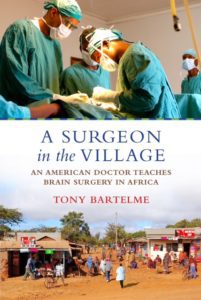 The shortage of surgeons leads to more than 17 million deaths worldwide every year. In his book, A Surgeon in the Village, recently published by Beacon Press,Tony Bartelme explores the problem by chronicling an American neurosurgeon’s quest to teach brain surgery in a poor and remote area of Tanzania. The neurosurgeon, Dr. Dilan Ellegala, visited Tanzania in 2006 and was surprised to learn that the country had only three brain surgeons for its entire population of 43 million people. Bartelme’s book documents the unintended consequences of the short-term medical mission model and new ways to reduce the global surgical gap.

[Reporting for this project was sponsored by the Nicholas B. Ottaway Foundation.]