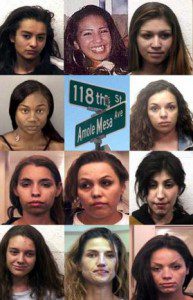 From Diana Washington Valdez, in a special report for the El Paso Times, the frustrating search for clues to solve the murders of several women whose bodies were found, many years later, in shallow graves on the outskirts of Albuquerque. Families are upset that police have made so little progress.

An excerpt: Relatives of several of the West Mesa murder victims, whose bodies were discovered in February 2009, said police initially brushed off the possibility of a serial killer and failed to investigate the disappearances as potential kidnappings and homicides.

“They saw them as ‘oh, just another prostitute dead,'” said Gloria Gonzalez, the aunt of Julie Nieto, one of the West Mesa victims.

Ray Schultz, who retired as the police chief, said that wasn’t true, that police worked hard to find all missing persons.

The families also claim that the Albuquerque Police Department appears to be distracted by a series of recent scandals, including the loss of all kinds of evidence from the evidence storage room; a U.S. Justice Department investigation into allegations of police brutality; and allegations of sexual assault by police officers. Albuquerque police denied that this is the case.