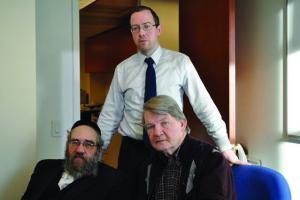 Hella Winston, an independent journalist who has investigated sexual abuse cover-ups in the Ultra Orthodox Jewish communities of New York and New Jersey, reports that a Brooklyn criminal case against a whistleblower, the father of a sex abuse victim, has fallen apart. Winston has received two grants from the Fund for Investigative Journalism to look into cases that had been covered up, and continues to track the developments.

From Winston’s report: The saga of Kellner’s case, and all that preceded his arrest, encompasses both a narrative of positive change within the chasidic community and a cautionary tale…

…Kellner himself is confident that “if, in the end, they will investigate what happened here and go after the intimidators, it would mean that all of this tampering and intimidation would end, that these people no longer run the streets. And that is probably worth the whole pain and suffering of my indictment because I don’t see any other way we could have accomplished this.”

Sam Kellner in photo at left, with his lawyers.