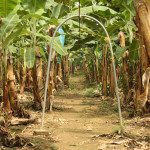 From Camila Osorio for The New Republic. Is it a new day in Colombia for the millions of peasants who were forcibly displaced from their land by paramilitaries or guerrilla groups during the past several decades? A land restitution law and peace process are in place, but for many, who have been threatened, and know of activists who were murdered, the choice is not clear. “The expectations are high, but so is the fear,” writes Osorio.