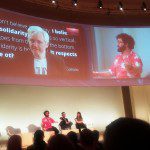 Thoughts About Today and Tomorrow From the Logan CIJ Symposium

I had the honor of attending the Logan Symposium in Berlin, thanks to the Fund for Investigative Journalism. The symposium covered secrecy, surveillance censorship — and the defense of freedom, democracy and a free press.

“You have to actually risk something if you want things to get better,” Snowden told us during a live video feed.

I traveled from sunny Yerevan to cold Berlin. Accompanied by gloomy March clouds, I hurried to the Berlin Congress Сenter every day. I compared lives in the two cities, taking notice of people’s moods. I thought about my city, where the rich and the poor are polarized. And I asked myself if reporters truly have the power to change things and influence lives.

Armenia’s capital city, Yerevan, definitely has its share of numerous sights, opulent restaurants and trendy coffee shops. But I thought about how the common citizen is deprived of basic social justice.

Over two days, I absorbed the sometimes-heated discussions, some of it spilling out into the corridors and continued over meals and coffee.

There are clear differences in how journalism is practiced from country to country.

Some countries guarantee press freedoms. That’s not the case in other countries. What does freedom of speech and expression mean in everyday lives?

Freedom is sometimes a costly thing. But it is worth fighting for — for the pursuit of truth and justice, and for fighting against corruption.

I have fought these battles in my own country, where being a reporter is not easy, where the cause of journalism is filled with numerous dangers and threats.

But this is the path I have chosen.