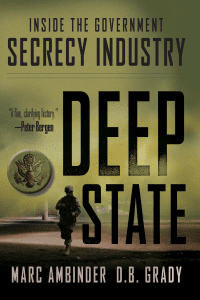 From D.B. Grady and Marc Ambinder, an investigation into secrecy and leaks, based on thousands of recently declassified documents and interviews with more than one hundred officials. From the book jacket: “Real secrets can’t be kept, trivial ones are held forever, and sensitive ones are far too susceptible to political manipulation.”

An excerpt from Chapter One: “With so many secret keepers, it is remarkable how well the secrecy apparatus has kept classified material that might be devastating to the state under wraps. The Bradley Manning WikiLeaks incident of 2010 is heretofore a black swan event. Its execution and impact was astonishing, yet in retrospect somehow obvious and inevitable. More astonishing, perhaps, is that the U.S. government seemed to have no contingency plans or response mechanisms in place. Manning wasn’t cashing in. He wasn’t attempting to overthrow the Republic. He wasn’t blackmailed. He wasn’t an agent for foreign intelligence.

“In fact, the direct intervention of foreign powers isn’t the cause of most leaks, and foreign spies aren’t where the information ends up. More often than not, the first place a leaked secret heads is the Internet.”