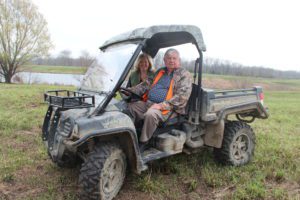 For decades, the Tennessee Valley Authority bought and traded mineral rights from energy companies in Illinois. During that time, from a period stretching from the 1960s into the 1980s, the TVA also signed deals with hundreds of farmers who agreed to sell their mineral rights and promised to sell their land if it was needed for mining. But as Kari Lydersen reports for Energy News Network, many of those farmers or their descendants now regret those deals, saying they never imagined the situation would play out as it has: with private companies profiting handsomely off the coal and using a destructive form of mining that was not common at the time they signed. Meanwhile the terms of TVA’s little-known leases seem like worse deals for the public than leases for BLM coal that have been widely criticized; and the mine continues to expand despite serious safety and environmental concerns.

In photo by Kari Lydersen for Energy News Network, Pat and Mark Kern could be forced to sell their farm because of a deal Mark’s father signed almost four decades ago.

[Funding for this project was provided by the Park Foundation and the Ethics & Excellence in Journalism.]