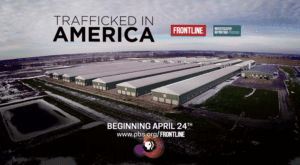 Daffodil Altan, Andrés Cediel, and the Investigative Reporting Program at the University of California, Berkeley, have teamed with FRONTLINE to tell the story of Guatemalan teens forced to work against their will on an egg farm in Ohio. The investigation into labor trafficking exposes a criminal network that exploits undocumented minors, companies that profit from forced labor and the role of the  U.S. government. The documentary, “Trafficked in America,” aired on April 24, 2018, on PBS stations.