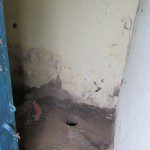 (Bobi, Niger State, Nigeria) – Reporting for Premium Times and the Daily Trust, Idris Akinbajo finds widespread fraud in the Nigerian federal government program intended to fight poverty and meet Millennium Development Goals (MDGs). His three-part series found that toilets built for school children were “actually pit latrines with no water. They were so poorly constructed that they were damaged by the first rain that fell in 2009. They have since become homes for rodents, as students cannot use them, for safety reasons.” As for school buildings built with MDG funds: “The ceiling of the classrooms simply collapsed following the first rainfall after construction.” Parents pulled their children out of school, fearing for their safety. Thus far, Akinbajo reports, the government has taken no action. “The Minister of State for education says his ministry cannot punish offenders based on newspaper expose and audit reports.” Among other findings: most projects intended to provide clean drinking water were phantom projects. “While.. the Presidency refused to act on recommendations by the Monitoring and Evaluation teams, Nigerians like Mrs. [Modupeola] Oladimeji continue to suffer from lack of potable water. ‘We don’t even want to know how much they have collected or spent. Let them just help us come and give us the water,’ Mrs. Oladimeji said.” Link to series.