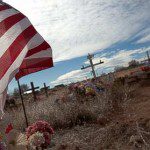 Marilyn Berlin Snell reports from Thoreau, New Mexico, about the reasons behind a suicide epidemic among Navajo teens.

“At the far end of the street, next to the Zuni Mountain pawn shop, is a dirt-packed and weedy cemetery. Plastic gladioli and roses decorate many of the graves, a few newly turned, offering the road’s only splash of color. Some of the 15 young Navajos who killed themselves two years ago are buried here.

The teen suicides in Thoreau happened on the heels of nine others, which took place in another reservation town, Fort Defiance, about 60 minutes away. After New Mexico media reported on Thoreau’s suicide cluster, Joe Shirley Jr., then president, declared a state of emergency that summer of 2010, on this, the largest Indian reservation in the country. The declaration allowed the tribe to target limited mental health resources on Thoreau.

Still, the acknowledgment of a suicide epidemic was a long-time coming.

“This has been going on for years, under the radar,” said Michelle Kahn-John, a Navajo nurse practitioner.