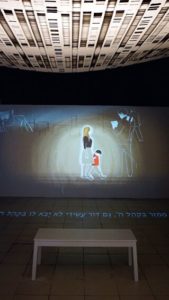 FIJ/Schuster Institute diversity fellow Michele Chabin focused on the desperate plight of families touched by mamzer status, the closest thing Judaism has to a class of untouchables. The status is passed down from generation to generation. Writing for New York Jewish Week, Chabin sheds light on why so-called mamzerim are sentenced to a life of secrecy and shame. While wars and migration once allowed most families touched by mamzerut to hide their status, the advent of the internet, digital recordkeeping and increasingly stringent rabbinical standards is making it more difficult to safeguard their secret. Those advocating for mamzerim say Judaism’s most influential rabbis lack the courage to find solutions to mamzerut.

In photo courtesy of Nurit Jacobs-Yinon, an exhibit of “Mamzerim, Labeled and Erased” at the 2017 Jerusalem Biennale.