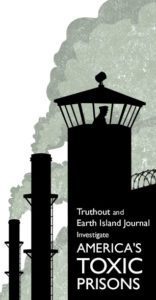 Earth Island Journal and Truthout spent more than a year on a collaborative reporting project investigating the links between mass incarceration, environmental degradation, and social justice. Using federal and state data gathered through FOIA requests, and on-the-ground reporting from prisons and prison-adjacent communities in California, Texas, and Pennsylvania, the “America’s ToxicPrisons” series revealed that from coast to coast, prisons, jails, and detention centers are exposing prisoners to environmental health hazards — through their siting on contaminated lands and hazardous locations, and their use of polluted drinking water. Often, not unlike factory farms, prisons themselves also become significant sources of pollution.

Since the series was published, the Department of Justice withdrew plans to build a prison on a mountaintop-removal site in Kentucky, the US Environmental Protection Agency announced plans to add prison locations to its online environmental justice mapping tool. What’s more, the NAACP’s Legal Defense and Educational Fund, citing the project,  sent a letter to Attorney General Jeff Sessions and Acting Bureau of Prisons Director Thomas Kane, to demand that the Justice Department investigate and remedy the conditions.