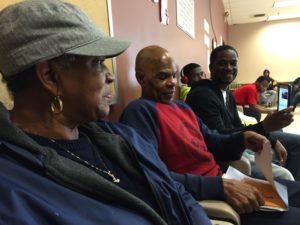 FIJ/Schuster Institute diversity fellow Lisa Armstrong continued her investigation into how the United States incarcerates juveniles. In a piece for The Intercept, Armstrong looks into the case of Zerious Meadows, who at 63 was recently released from the Macomb Correctional Facility near Detroit.  He spent 47 years behind bars. The United States is the only country that sentences minors to life in prison without parole, Armstrong has previously reported. In her current project, Armstrong notes that Michigan has the second-highest number of juvenile lifers in the country. A 2016 court decision gave the approximately 1,500 people who were sentenced before 2012, like Meadows, a chance at release.

In photo by Lisa Armstrong, Zerious Meadows, center, spends time with family after being released from the Macomb Correctional Facility near Detroit.