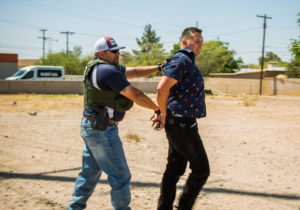 As Liz Navratil reported for the Pittsburgh Post-Gazette, federal data shows more than 4 million people in the United States are on parole, probation or similar programs. In 2014, more than 350,000 returned to jail, with nearly 100,000 of them for new crimes.

Research shows that addressing violations quickly reduces the probability that probationers and parolees will go on to commit new crimes.

Yet, agencies across the country often lose track of probation and parole violators – in some cases, leading to horrendous consequences.

(In photo, a federal agent assists in the arrest of Antonio Alejandro Garcia, 37, in Pima County, Arizona. Garcia was wanted for a probation violation in one case and for leaving his sentencing in another case. Photo by Andrew Rush, Pittsburgh Post-Gazette.)