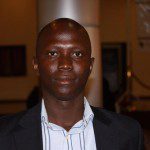 (Washington) The Fund for Investigative Journalism is proud to announce that Idris Akinbajo, whose investigation of mismanagment of Nigerian government programs to fight poverty and meet basic standard-of-living goals, called “Millennium Development Goals,” was supported by the Fund, has been honored as “Nigerian Investigative Journalist of the Year 2012.” The announcement, made in Abeokuta, Nigeria, said this about Akinbajo: “The judges said he brought ‘a sense of depth,  craft, integrity, and class act, to his reporting and writing which not only  put the case for accountability in government forcefully on the table, but also brings a lot of pride to Nigerian journalism.‘”  The journalist won the award for his “overall outstanding performance” during the year, which included his Fund-supported series of reports on fraud in the Millennium Development Goals programs. That series also won the Online category award, in the annual Wole Soyinka Awards for Investigative Journalism in Nigeria. The award is named for Africa’s first Nobel Laureate in Literature, Wole Soyinka, who is a strong voice in Nigeria for freedom of expression and democracy.