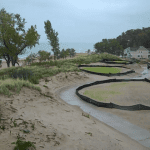 Reporting for MSNBC.com, Robert McClure of InvestigateWest finds that city and state parks around the country are being developed into golf courses, condominium – hotel complexes, and parking garages, all to raise funds for cash-starved government bodies. This, despite promises to maintain open and recreational space that relied on federal funds for land acquisition and improvements. The National Park Service has an oversight role, but as InvestigateWest reports: “Park Service staffers strive to keep on top of park conversions… They rely on Google Alerts to help them know when a park is undergoing conversion, [former Park Service official Michael D.] Wilson said. ‘It’s amazing how many conversions we discover just because Google sends an article to staff about a park in Podunk, Ark. being converted to some other use,’ Wilson said.”