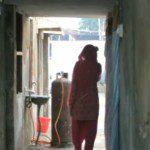 Reporting for the Atlantic, Habiba Nosheen and Hilke Schellman describe the fate of girls in Pakistan: aborted and abandoned by families who prefer boys.

The birth of a girl is cause for mourning in a country where parents calculate the cost of having male or female children. As their report explains:

“A recent United Nations report on sex selection cites the Population Council’s research that only 20 percent of females in Pakistan enter the labor force. This means that most women in Pakistan can’t support their parents financially after they retire. Because the government offers little or no assistance for retirees, someone has to take care of Pakistan’s elderly, and that responsibility typically falls on sons. For parents here, having a son often means having a retirement plan, while having a daughter can mean losing your savings to the dowry.”

In this video, Nosheen, who is from Pakistan, tells how her reporting began with memories of the grief-stricken reaction to the birth of her younger sister.