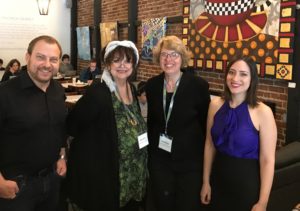 (On a break from the Reva & David Logan Symposium on Investigative Reporting at the campus of the University of California – Berkeley.)

At the conference we heard Pulitzer Prize-winning journalists describe “how the sausage is made,” that is, how reporters come up with ideas, get interviews with reluctant sources, report in war zones, verify facts, and work with editors.

Hany Farid, a newly hired UC Berkeley computer science professor, showed us how easy it has become to manipulate audio and video so that, in his demonstration, Jordan Peele’s words were coming from Barack Obama’s mouth. He said the technology has a benign purpose, to help movie producers avoid using subtitles on foreign language films, but could be misused by public officials to deny that a video had accurately captured their words.

From left to right FIJ treasurer Mark Greenblatt and FIJ diversity fellow Maria Martin. To my left is Angelika Albaladejo.  Martin is an FIJ fellow working with Reveal this year; FIJ fellow Albaladejo is working with the Marshall Project for the year.