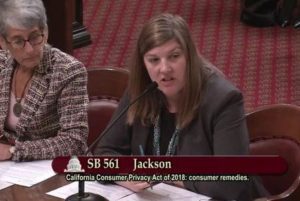 California Attorney General Xavier Becerra says his office is ill-equipped to prosecute violations of the state’s landmark data-privacy law, which takes effect in January, the San Francisco Public Press reported. Only a handful of the most egregious cases will be prosecuted per year. Instead, he wants aggrieved consumers to take violators to court on their own. The story was the third part in a series on data privacy, “Your Data, Their Dollars,” online and in print editions of the Public Press this year.

Stacey Schesser, supervising deputy attorney general on consumer protection, testifying at a state Senate Judiciary Committee hearing in April in support of Senate Bill 561, which would give consumers the power to sue companies under the California Consumer Privacy Act. At left is committee chair Sen. Hannah-Beth Jackson, Democrat from Santa Barbara, who sponsored the bill. Photo via California Senate
Ana Arana May 5, 2019