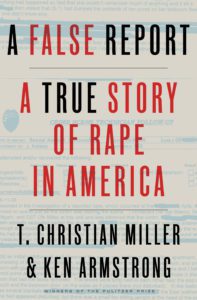 T. Christian Miller and Ken Armstrong have expanded their Pulitzer Prize-winning story into a book, “A False Report: A True Story of Rape in America,” published by Crown in February. The book tells the story of Marie, an 18-year-old near Seattle, Washington, who reported being raped, only to be branded a liar by police. Miller and Armstrong first wrote about the case for ProPublica and The Marshall Project. The story was also a “This American Life” episode and will soon be an eight-part series on Netflix.