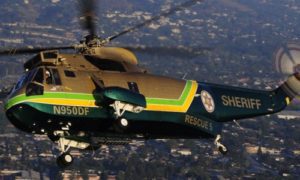 In the last four years twenty-one members of the Los Angeles County Sheriff’s Department have been convicted of federal crimes, including the department’s popular former sheriff Lee Baca, causing the head of the FBI’s Los Angeles office, to describe the LASD as having a “toxic culture of corruption seen only in the movies.” A three-part investigation by WitnessLA by Celeste Fremon into possible incidents of fraud relating to a fleet of Sea King helicopters loaned under a controversial Defense Department program suggests challenges remain in rooting out a culture of fraud.

[Reporting for this project was sponsored by the Ethics and Excellence in Journalism Foundation.]