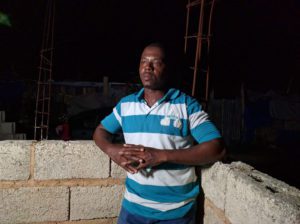 Over the past 15 years, the U.S. government has quietly released more than 400 people convicted on international terrorism-related charges. Some were deported to other countries following their prison terms, but a large number of convicted terrorists are living in the United States. Reporting for the Intercept, Trevor Aaronson tells this story through the case of the Liberty City Seven, a group of men caught up in an FBI counterterrorism sting in Miami in 2006. A decade later, all but one of the Liberty City Seven defendants are free, suggesting these so-called terrorists weren’t particularly dangerous in the first place. Aaronson’s latest piece is part of a larger body of work that examined 15 years of terrorism international prosecutions in the United States.

(In photo by Trevor Aaronson: Patrick Abraham is one of the so-called “Liberty City Seven” who were convicted of conspiracy to provide material support to a terrorist organization, among other charges. After he was released, he returned to Haiti, where he teaches English at a school in Port-au-Prince.)

[Reporting for this project was sponsored by the Ethics and Excellence in Journalism Foundation.]